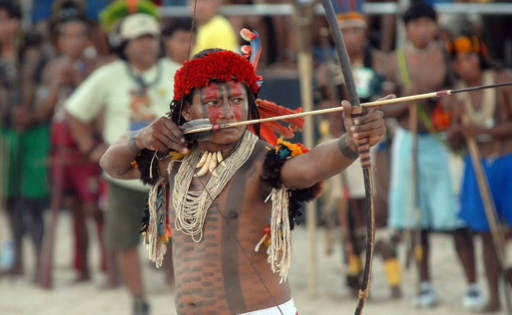 Numerous Brazilian tribes have gathered together to hold the 12th Indigenous Games in Amazon Region, Brazil, seen as a way of promoting not only an athletic event but a cultural revival as well.

Competitors in the Indigenous games participate either individually or as teams. Instead of team uniforms and athletic shoes, participants in this unique event put on body paint and don native attire in representing their respective tribes. Many people believe the ongoing games have a connection with Brazil’s upcoming hosting of big sports extravaganzas, the 2014 World Cup and the 2016 Olympic Games.

Winning is not the objective

Carlos Terena, Indigenous Games organizer, said that the event is not really looking to award champions or discover potential athletes. He said it is not a competition in its true sense but a celebration and a way to preserve the tribal culture of his nation. Terena whose surname is the name of his tribe also said that they do not want to adapt the spirit of competition in the Games. Competition, he said, is the usual culture of people in the Western side.

There is a big turnout of participants in the event, with 1,500 players representing 48 Brazilian tribes. There are more who came from other nations that went to Cuiaba, the state of Mato Grosso’s capital to witness the games. Winners will be awarded seeds, wood carved “medals,” and other native elements. Traditional sports from their tribes are conducted as mere exhibitions and not as contests.

Spectators are treated to a fun occasion. One of the favorite events is the wild tree-trunk relay race that involves 9 or more robust runners racing against each other to a distance of 500 meters in a red-dirt arena. The relay team members take turns in carrying a hundred kilo tree chunk on their shoulders. Such a strenuous feat is difficult to hurdle that those who make it to the finish line are already considered winners.

One game that resembles soccer, called “xikunahity” requires players to crawl on the ground while they push a ball forward with their heads. Other games that are patterned after traditional sports like wrestling and judo are also included in the competition.

The actual that indigenous people have are put to test with the current event. In archery, bare-chested contestants carry long bows and step on a line of palm leaves as they aim for the target. Yakari Kuikuro a resident along the Xingu River in the Amazon, said he is participating in this game for the fourth time. He said he is delighted that he gets to paint his body again and perform a ritual-like act in the archery event. Yakari Kuikuro laments that people in his village no longer paint their bodies but in the Indigenous Games, he sees the revival of this dying art.

A former member of Canada’s Parliament, the Cree Nation’s Chief Willie Littlechild, said that the games come as a blessing because people get to see the rich culture of indigenous people around the globe. It would have been more meaningful, Littlechild said, if non-indigenous people who came to witness the games were also allowed to participate. Through this interaction, he said, the holistic approach in attaining mental, physical, spiritual, and cultural welfare of human beings can be fully realized.