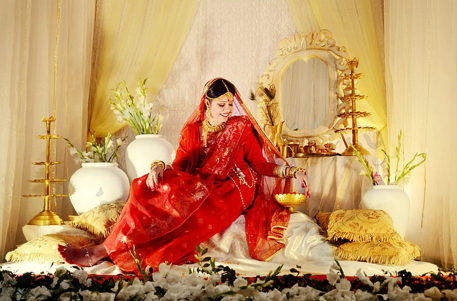 The UNESCO has recently declared Jamdani sari making as an “Intangible Cultural Heritage of Humanity.” The unanimous decision came from the agency’s Cultural Organization’s Inter-Governmental Committee for the Safeguarding of Intangible Heritage in recognition to the greatest accomplishment of Bangladeshi weavers.

Jamdani refers to the woven muslin customarily worn by the people of Bangladesh in many ceremonies such as weddings and traditional practices. The elaborately woven and patterned translucent cotton is held as a symbol of royalty. By history, the garment is worn by upper class members. Bangladesh holds the Jamdani sari as a symbol of self-recognition, status, identity and dignity. It also gives a feeling of cultural identity and social identification for the women of Bangladesh.

Crafted by people of Dhaka, Jamdani is woven on a handloom using sheer cotton. Vivid patterns and complicated designs constitute colorful details that give the whole outfit a majestic air. “Jamdani is a time-consuming and labor-intensive form of weaving because of the richness of its motifs which are created directly on the loom using the discontinuous weft technique.” UNESCO further said that weaving is a flourishing craft these days because the fabric used in making saris is popular especially among Bengali women. Jamdani saris are habitually used as principal attire for Bengali women in special occasions in their home country or overseas.

One of the criteria on which UNESO based its judgment in declaring Jamdani as an Intangible Cultural Heritage of Humanity is primarily its being a labor-intensive weaving form. Incidentally, the UNESCO Heritage Committee has included 14 elements on the criteria list to lift consciousness about the value of intangible heritage so that community traditions that reflect varied cultures will be recognized worldwide. UNESCO acknowledges that Bengali weavers have taken their own identity in the Jamdani weaving craft. They are proud of their own skills and heritage for which they are internationally recognized and respected. Jamdani craft has accordingly met all the requirements for inclusion in the Cultural Heritage designation.

Jamdani sari weaving has become a Bangladeshi tradition. Incidentally there are some master weavers who have become conveyors of this national artistry. These weavers consequently hand down their knowledge to their descendants so that the craft is safely perpetuated through the generations. There is in fact a community of weavers in the country that is composed of loom-dressers, dyers, spinners and experienced weavers. Together they have formed an organization bound by enduring unity, distinctiveness and unique character.

Jamdani weaving is actually a family custom in communities that practice the craft. “It has been passed down through generations particularly within families. Jamdani weaving provides its community a sense of cultural identity and continuity as well as a source of income and empowerment,” officials of UNESCO Heritage Committee stated. The Committee believes that with the inscription of Jamdani weaving occupation as an Intangible Cultural Heritage, the tradition as well as the craftspeople and agencies that work together in its preservation will be safeguarded.

The word Jamdani originates from Persian language. It is taken from “Jama”, which means cloth and “dana” which refers to a small granule. An estimated 500 people are practitioners of this artistry. According to UNESCO, Jamdani weavers have been in the industry for many generations. The textile used in the weaving is rich, reflecting the historic element of textile business in Bangladesh. By being named as an Intangible Cultural Heritage, Jamdani will be given more exposure and visibility in a global scale.