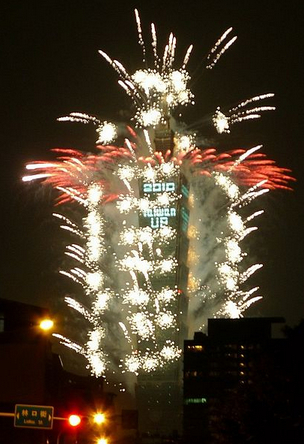 In a few days, Taiwan, along with other Asian countries will be celebrating the Spring Festival. In some areas, it is called Chinese New Year and it starts on the 31st of January this year. Taiwan is gearing up for the must-see event, which brings thousands of people to the already-densely populated nation. The visitors are not only foreigners; locals have actually been booking flights to Taiwan several months in advance for the occasion. Taiwan becomes such a special place during the Chinese Lunar New Year’s Eve celebration, which is distinctly different from the New Year countdown at Times Square in New York and the magnificent fireworks display Sydney, Australia is known for.

The New Year’s Eve countdown in Taiwan in one huge spectacular show. In fact it is the world’s biggest New Year countdown event, which happens at the country’s Taipei 101 building. Just imagine yourself among the crowd of thousands during the final New Year countdown. The Taipei 101 building becomes a glowing beacon of light, with lights starting on its first floor all the way to the top after which fireworks are set off before the special star-studded ground ceremonies and activities begin. Despite the cold of winter, this is one of the major draw for tourists, both local and foreign, to Taiwan. All the events are managed by the city government, and their concept is making the city of Taiwan the New Year City.

Not only for the New Year

However, Taiwan and capital city Taipei are not just good during the New Year events. There are many things to see and do in Taiwan that draw crowds, which are unique in themselves. Top crowd drawers are Taiwan’s night markets. The island of Taiwan is even smaller than Switzerland, and it is home to 23 million people. Despite its size, it has about 300 night markets scattered all over the island. Aside from bargain shopping, these night markets are very popular for their street food offerings. Locals call them “xiao-chi,” which translates to small eats. Craving for oyster omelettes in the middle of the night? You can get this at the night market. Specialty drinks range from snake blood to bubble tea. Topping the list is Tainan Flower Night Market, followed by Luodong in Yilan and Feng Chia in Taichung.

The citizens of Taiwan have been enjoying free WiFi access since 2011. It has since then offered free WiFi access to tourists, by signing up for an account using their passport at the centers of the Taiwan Tourism Bureau and their offices located in transportation stations in Tainan, Taichung, New Taipei and Taipei.

If you want to see samples of the best Chinese painting, the National Palace Museum located in the capital city of Taipei has the world’s largest collection of Chinese artwork and artifacts. There are over 650,000 items to be seen in the permanent collection alone. However you have to make several trips to Taipei to view the entire collection since only about 10,000 items or more are displayed each year.

Obsession with the mouthless cat

Taiwan is obsessed with Hello Kitty. It does not only have a Hello-Kitty themed restaurant where the plates, utensils and even the food carry the cat’s shape. It has the world’s first Hello Kitty fruit-flavored light beers, manufactured by Taiwan Tsing Beer. Eva Airways have launched their Hello Kitty-themed airplanes in 2013, while Kaohsiung’s Grand Hi-Lai Hotel offers Hello Kitty-inspired rooms.

Would you believe that xiaolongbao, the national food of Taiwan has made it the Miele Guide and earned Michelin stars? Xiaolongbao are just small steamed dumplings, filled with meat and broth but pack wonderful flavors that are quite distinct. Taiwan truly is a place-to-be these days.