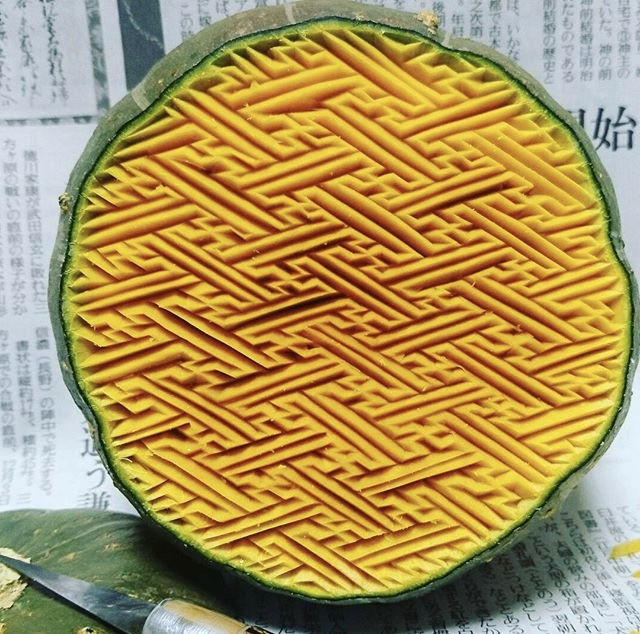 What do you see when you look at the cross section of a broccoli stem? Odds are, most of us don’t think of it as a canvas. But that’s exactly what it is for food carving artists.

Internetland is abuzz with a newly rediscovered tradition: the ancient art of fruit and vegetable carving. Japanese artist Gaku is blowing minds and shredding gourds with the cutting-edge style of his dizzying bladework. Check out some of these samples of his intricate food carving! 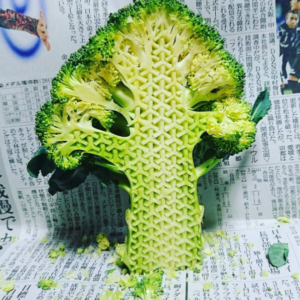 The art and craft of edible plant sculpture is nothing new in the east. Japanese food carving is called mukimono, and has long been a hallmark of elegance in Asian cuisine.

Mukimono’s popularity has spanned generations, particularly in Japanese and Thai cuisine, where it has been practiced since ancient times. Traditionally, the chef carves carrots, daikon radishes, or the skins of other veggies into floral designs or animals. The small sculpture is served as a garnish. Food carving is often seasonally themed as a way to celebrate the connection between our spin around the sun and the morsels that nourish us.

The longstanding custom of mukimono is such a fixture that there are even specialty food carving knives designed for the artform. But judging by Gaku’s photos, he’s using something more like an art school exacto blade.

And of course, instead of delivering the arrangements on an elegant side plate, they’re presented as insta-delicacies. 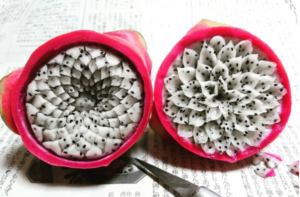 What’s most remarkable about these examples of food carving is the speed with with Gaku achieves such detail. Fruits like apples, avocados, and bananas turn brown when cut. If the artist spends hours on these sculptures, they would brown before photographing. The fact that they’re fresh shows they’re carved in mere minutes.

Unless of course the artist has gotten his hands on some of America’s new anti-browning apples. There’s a USDA approved crop, called “Arctic Apples,” that are genetically modified to resist the natural process of oxidation. They’re able to be sold as pre-sliced children’s snacks at a fraction of the cost because they appear to stay fresh longer.

Oxidation is a natural chemical reaction that happens when oxygen comes into contact with the inner flesh of organic matter. The same thing can happen to your body tissue, which is why it’s important to gobble up anti-oxidants like they’re going out of style.

How do we humans get our antioxidants? By eating nutrient dense fruits and veggies, just like the subjects of Gaku’s food carving.

Food Carving in the West 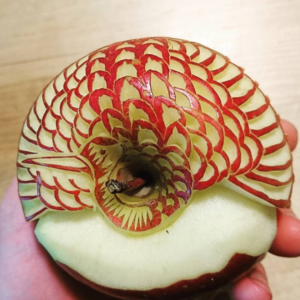 Western history has its own love story with food carving, although for a slightly spookier reason. Irish legend about a trickster called Stingy Jack says he swindled the devil and is doomed to roam the earth for eternity.

His wandering spirit uses a hollowed out turnip as a lantern. Some say Jack of the Lantern, or Jack O’Lantern, can still be seen when the darkening winter days are approaching and the veil of reality is thin.

Celebrants of Samhain (pronounced “SAO-when,” the pagan precursor to Halloween) carved ghoulish faces into turnips, like Jack O’Lantern’s, to keep menacing spirits away. When Irish Americans imported this tradition, they found North American pumpkins to be even more suited to the task.

Now of course, we celebrate Halloween with our own festive Jack O’Lanterns fresh from the pumpkin patch.

Looking for Another Helping?

If you’re hungry for more food carving, check out the delicate work of Thai artist Krasinthusith. The little known craftsman has suddenly been getting attention for his intricate work in watermelon and coconut. And if you think his melon carving is impressive, wait until you see his soap sculptures!

With artists like Gaku and Krasinthusith keep cranking out these dazzling arrangements, it looks like mukimono is poised to enjoy a new wave of popularity and innovation. But one question still remains–should you or shouldn’t you eat the garnish?