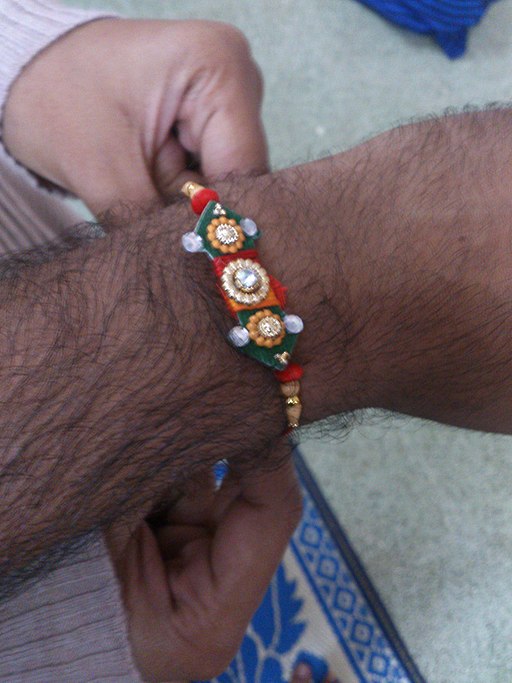 India celebrates quite a number of festivals throughout the year. Most of them are based on the changes in weather and their significance and impact in people’s lives. Today, August 7, India celebrates Raksha Bandhan or Rakhi.

The festival honors the special bond between brothers and sisters. The Hindi term Raksha Bandhan translates to “band of protection” in English. It’s a festival that started 6,000 years ago during the time of the Aryans.

Raksha Bandhan is celebrated when the moon is full on the month of Shravana, that usually falls around August in the Western calendar.

Traditionally, sisters tie a Rakhi bracelet on their brothers’ wrists. It’s a symbol of protection graced with affection and love of a sister for her brother. Even if the bracelet seems frail, it symbolizes a very strong iron chain of inseparable bond of love and trust and beautiful relationship between siblings.

If you are familiar with the exchange of friendship bracelets that are made from colorful silk or cotton threads, the ritual is the same, although in India, it goes much deeper than that. It’s a symbol of sisterly or brotherly protection and a call to people to live harmoniously with one another.

Raksha Bandhan is primarily a festival celebrated in North India, but it spread wide across the nation and observed by Indian brothers and sisters all over the world.

Preparations for the Rakhi start before the purnima or full moon occurs. First, the sisters will find the right thali or the items for the ritual or poojan. The thali consists of the rakhi threads, diya (the lamps for rituals), rice, kumkum powder, sweets and incense sticks (agarbattis).

On the day of the festival itself, the sister ties a Rakhi on her brother’s wrist. They both pray to God for a good life for each of them. The sister performs the aarti (singing the ritual song while wicks soaked in purified butter or ghee are lit and offered to family deities).

She also applies kumkum powder and a tilak or tilaka on her brother’s forehead. The brother on the other hand promises to take care of his sister through bad and good times.

The entire family joins in the Raksha Bandhan celebration. There will be plenty of food and sweets as well as dancing and singing. The brother normally prepares a gift for his sister as a token of his affection and love for her.

There were times in history when tying rakhis symbolically meant protecting people. A mother, daughter or a wife tied rakhis. Rishis tied rakhis to people who sought blessing from them. There were instances when sages tied the thread bracelets to themselves as protection against evil.

Indian history and folklore have chronicled some of the early occurrences where rakhi ties were exchanged. They have records of the stories between Rani Karnawati and Emperor Humayun, Alexander The Great and King Puru, Lord Krishna and Draupathi, King Bali and Goddess Lakshmi

Although Raksha Bandhan is still celebrated to commemorate the bond between sister and brother, there are people who tie rakhis to their close friends and neighbors to signify peaceful co-existence.

The event is celebrated almost in the same manner in many parts of the world where there are Hindu communities. Today however, families do not live close to each other as in the past. Since brothers and sisters might be living in different places, Raksha Bandhan becomes a reason for family reunions and celebration.

They exchange gifts, share sweets, and flavorful dishes. They also share past experiences while living apart. If the distance is too great, brothers and sisters exchange rakhi cards or send gifts through mail.