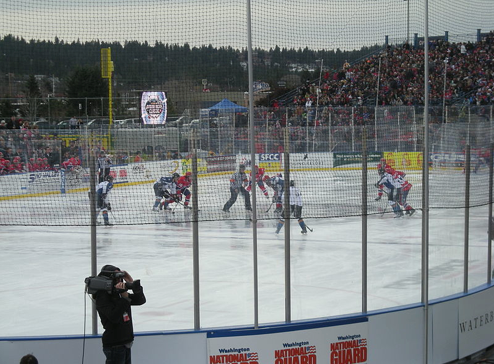 Before playing against the Tri-Cities Americans in a recent game, Spokane Chiefs hockey players paid tribute to their native heritage through a ceremony dedicated to different Indian tribes. For some minutes while the drums rolled and Coeur d’Alene Julymash Powwow dancers performed, the Native Americans in the audience were transfixed, relishing their patrimony with pride and ardor.

The Spokane Chiefs and Tri-Cities Americans are among the closest and hottest rivals in the Western Hockey League. Nonetheless, before they started the game, a ceremony was performed before more than 7,000 hockey followers in the stadium. First the drums rumbled followed by video images of Powwow dancers on the large screen. The Spokane Tribe of Indians from Wellpinit, Washington sang the flag song, which is considered the national anthem of Native Americans. Other non-native individuals in the audience witnessed the ceremony as well, which to them was an enthralling way of presenting the proud culture of the first settlers in America. The pre-game ritual was the Chiefs’ way of commemorating the Native American Heritage Month.

Representatives from native tribes from Plateau Tribes from Idaho, Washington, Oregon and Canada were all present in the hotly contested hockey game between the Spokane Chiefs and Tri-Cities Americans. Mark Ramos, member of Coeur d’Alene tribe who assisted in the ceremony, said: “The neat thing about this is that it really shows off our culture. The Chiefs organization doesn’t have to do something like this. This is about promoting Indian culture and showing non-Indians the beauty of our culture.” Ramos who worked with Luke Apple, the Chiefs account representative, added that he wanted to provide inspiration to Indian kids and encourage them to play hockey and at the same time appreciate the beauty of their culture. He expressed hope that the ceremony constituting of the flag song and dance will motivate them.

Participating in the tribute were various students and youth of Native American descent. Misty Spencer, a Spokane Tribe member and nursing student at Eastern Washington University was the Eagle Staff bearer. “Being asked to carry the Eagle Staff is really exciting. It’s a really big honor,” Spencer said. The student also shared his experience as a big hockey fan since he was nine, back in the old Spokane Coliseum. Spencer said as a kid, he would watch the Chiefs and it thrilled him to be able to skate on the same ice where the team play.

Andy Billig, co-owner of Brett Sports and Entertainment with Bobby Brett said he is proud to be in partnership with the local Native American Tribes. He also noted that the partnership is committed at not using Native American symbolisms in the team operation. According to him, they do not use mascots, slogans or chants that are associated with the Native Americans because these things can be derogatory to the imagery of the native tribes. Unlike other sports groups that give Indian names to their teams, Brett Sports and Entertainment strives to respect the prestige and honor of the Native Americans by not associating their teams with any of the tribes through mascots and other forms of symbolisms that pertain to American Indians.

The hockey game that took place after the ceremonial salute to Native American tribes saw a 4-3 win by the Spokane Chiefs over the Tri-Cities Americans. The game was part of the major match-up in the U.S. Division. Jason Fram of the Chiefs camp garnered significant scores during the last 26 seconds of the game.